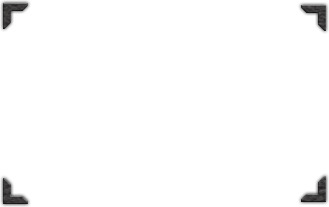 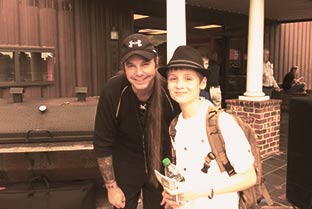 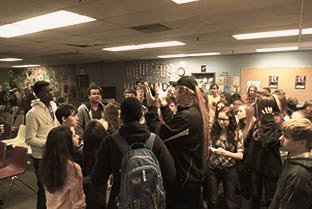 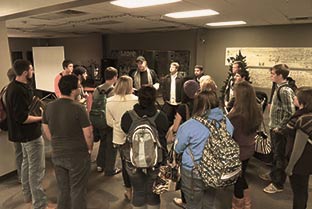 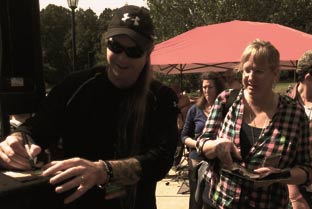 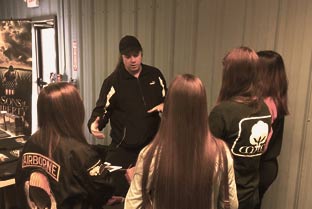 There aren't words to describe the reality of what you guys sing, say, and teach.  At least I can't think of any.  You guys rock!
Laura, Iowa

We don’t want to hear articulate old men and theories and facts about stuff, we want to listen to someone who knows from experience what the deal is, and that is what I saw here today.
Jennifer, Tennessee

I’m a freshman in college now, but when I was a junior in high school, you and JYP came to our school.  At the time I didn’t know what to get out of it...I couldn’t give it an instant testimonial of profound change, but your coming to my school has lingered in my thoughts since that day.  I recently discovered your little white book you handed to some of us in my room.  I read it through that night and felt obligated to thank you.  It is a really powerful piece of literature.  I feel strongly you guys should consider making a 2nd trip to our little Iowa school.  So, thanks for coming, and good work!  Keep persevering!  YOU ARE making a difference.
Joshua, Iowa

I would like to greatly thank you for speaking at our school. We have had speakers before in the past but never ones that really get through to us students.  What you all are doing is an inspiration to me as well as others.  The fact that you are so blunt and honest is what our town really needed. I think a lot of us really stopped and thought a little more and a little harder that day.  What you all are doing is just amazing and I believe you should never stop trying to make a difference in young peoples’ lives because a lot of teens need to be told the truth.  Thank you to you all for everything.
Dallis, Kansas

This is the first performance that I actually enjoyed and not just to get out of class!  Thank you for coming!
Laura, Kansas

The assembly was awesome!  Very personal and great info!  Thanks for the motivation and awesome message!  Rock on!
Kayla, Kansas

When our school first heard that Junkyard Prophet was coming everyone shunned it, complaining and saying that they couldn’t believe how our school was pushing more "say no to drugs" crap. When I first walked into the gym everyone was still complaining. My belief that this lyceum was going to be the same as all the others. Ya know, fall-asleep boredom, not really listening. About 15 minutes into it, I saw a completely different school. I had never seen people pay attention or even have a reaction. It was like coming out of a coma or something. I think these guys have a positive message, and they put it in our perspective.

I was really surprised at how much you reached out to people and how everybody seemed to be affected by all you said. I think you made a real impact in our school.

I really enjoyed the "Junkyard Prophet," and when you guys started talking about all of the drugs, and everything you guys said, I think it made a change to everybody’s heart. And I think that I see people differently too. I really enjoyed you guys a lot. Thank you so much for coming!

I just wanted to write to tell you that you were awesome! I will never forget your speeches, and you are very inspirational......Thank you!

Wow! You guys made such an impact in my life. You spoke of everything I had ever believed in.

Ever since I heard you guys speak, not a day has gone by that I have not thought about what each of you said. You all speak with such power that it just sticks in my head, and I think that is awesome that you all can express that kind of emotion to people.

I used to smoke and drink every once in a while to fit in but now I know I don’t have to! Thanks! Your stories you told really hit home to me! I hope you guys see that you saved my life! After the ladies did them skits, I understood that beauty is totally on the inside! You guys really made me think.

I really liked when you said, “The more you tell us not to do it, the more we do it...”  Hopefully it made some people think!

I thought the courage Bradlee had to cross over the line others are afraid to is admirable.  I’ve always wanted to be a motivational speaker and Stephanie’s approach was awesome!


A lot of people are afraid to give teens the facts these days because they don’t want to scare or offend them.  The truth is that teens these days need to be scared or offended if it means hearing the truth and the facts.  Bradlee’s speech greatly moved me.  He didn’t “beat around the bush” like most adults did.  He was truly amazing and it was one of the best speeches I’d heard in my life!  God Bless!


I thought that what you were saying about the DARE was sooo true. When someone explains what drugs are is one thing but to show how to make them an to show little kids and explaining how to make it over and over again makes kids want to try it.

When Bradlee first started speaking I expected to hear the same pity stories I’ve heard all my life.  As I listened I realized that Bradlee spoke the truth- nothing more, nothing less.  That’s what kids need.  We don’t need excuses for our actions, we need someone to tell us the facts so we don’t need excuses.  I just wish he could talk to everyone because I know he would affect lives. Thanks, Bradlee, it’s the best talk I’ve ever had!

The truths and facts that you have shared with us have changed our lives. The work that you do every day is awesome!

I saw you guyz (and gals) perform in Pittsville, Wisconsin and have since moved back to my hometown in Longmont, Colorado. Maybe I’ll have you all come down to my high school and change my friend's lives as much as you have mine. You’ve made me see life in a different light. Thank you.

You guys came to my school at Burke Central, and when we heard that you guys were coming to perform, we were all excited, I think everyone enjoyed every bit of what you guys had for us. You guys were GREAT! And I think you guys proved a big point in everything that you guys told us, and every example you set for us. I thought it was really awesome and I hope it helped / helps people all over the Nation. Thanks for coming!!!!

Thanks so much for coming to our dinky town of Rugby. I’m glad that you didn’t talk to us like we were not able to comprehend the message you were trying to get across.

Thank God that you came to Rugby. I love you guys so much, you really touched me so much and I don’t think that I will ever forget what you said. You helped us more than I and you will ever know. I am a Christian, I love God. But I am going to tell you that you helped me realize that even in my life I have dark and evil sins lurking. And I love you guys for it.

I just want to say you guys did an awesome job! You had an insightful impact on me and some of my friends. The mini concert was great. Steph has a great voice and the sound rocks. Thanks for coming!

You guys ruled! I just want to say that I loved EVERY SINGLE little part of it. I loved the point you made and I just want you to know that if others weren’t influenced, I am and I will do my best to pass the words of wisdom on.

I just wanted to let the whole band know that you guys ROCK! Brad you influenced me.... The music and speeches were all, I repeat, all very very influential and I hope you guys can come play here again. The CD was awesome, I listened to it about 10 times over and I am still listening. I love getting the newsletter; you guys are an awesome inspiration to me.

I was at the concert that you all did for the Frontier, Sheidler, and Tonkawa schools. I thought that the concert and everything was awesome... and the speech taught me a lot, too. Thanks for coming all this way to have it all for us.

I think that you guys are doing a wonderful job with all you do. I hope that there are still programs out there like yours when my 5-year-old daughter gets to be older and deals with some of life’s issues. Hopefully, all that I instill in her now will benefit and she will stand up for what she has been taught and believes in. Keep up all of the good work.

I just thought I’d say how much of an impact you have had on me. It’s hard for me living in this small town and having everyone like me. You guys helped me understand it’s not what other people think of me that matters.... Thank you for how much you have helped me.

You guys came to my school and I just wanted to say that you guys are awesome. I really enjoyed and really understood all the stuff that you guys said. It really hit home for me. Thanks so much for everything that you do.

Hello, I'm from Madelia, Minnesota. You came to perform and talk to us today. And the things you guys all said really smacked me in the face. I really started thinking about a lot of things after the group thing ended. I used to do drugs, drink alcohol, smoke cigarettes etc. but now after that lecture it made me think of what kind of person I really wanna grow up to be! It helped me realize that I needed to change for the better just so I could become a role model for the rest of my classmates and friends. I am in a depressed stage right now and thought I was alone and in the dark. I have attempted suicide so many times! And I'm really glad that you guys are helping teenagers and kids around the world. Everyone needs to be slapped in the face and wake up and smell the coffee! I have learned a lot from You Can Run But You Cannot Hide and I hope many more get your message, just like I did. So I wrote you guys to thank you for coming to Madelia! I think you got to a lot of people's hearts today and made them really think.

Hi My name is Curlene and I was one of the kids at Madelia High School. I think your band is very good. I like all you guys' songs. You guys are very good on your instruments, too. You guys have very good rappers. I like the song that the girl sang about the "room with a picture."  If you guys get time to will you please e-mail me?

donations
all donations to our cause are gratefully received 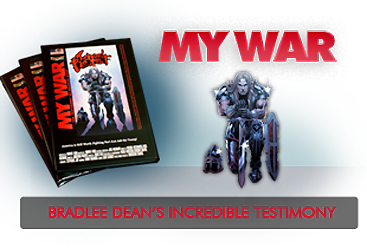 Get your copy from the store today »
My war Comic 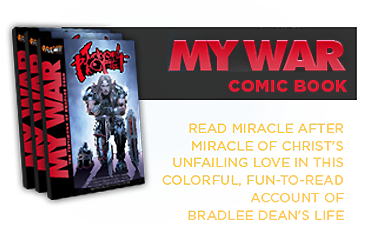 Get your copy from the store today »
BradleeDeanSOL on Parler 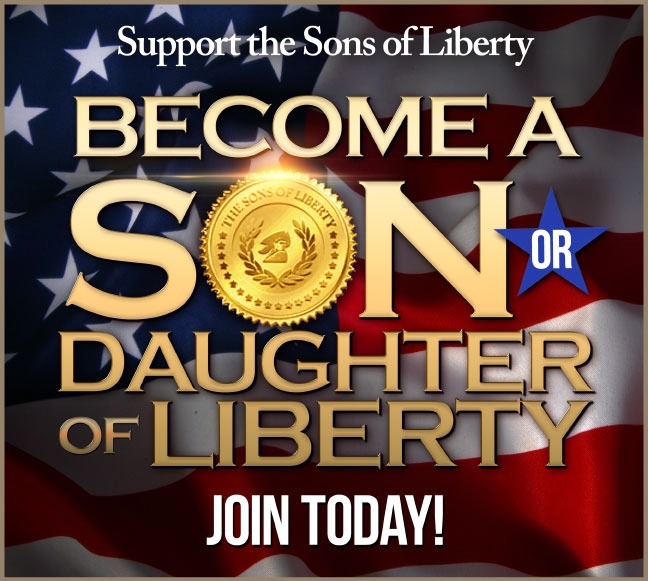 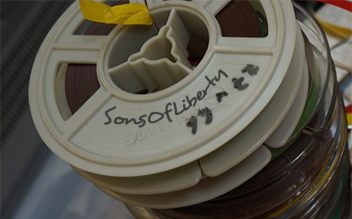